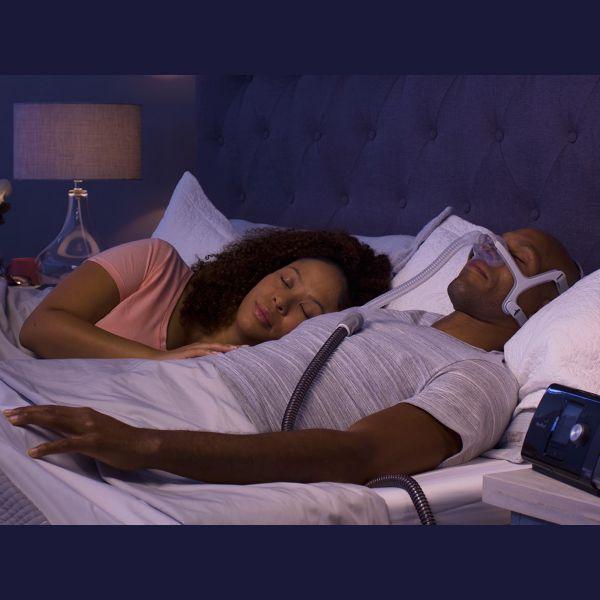 Sleep Apnea(also spelled sleep apnoea) is a sleeping disorder(most often obstructive sleep apnea) in which a person repeatedly stops breathing as they sleep. This means that they are repeatedly awakened, resulting in poor sleep quality. This has serious consequences for the person in their day to day life, worsening many existing ailments, and exacerbating stress and conditions such as depression.

When you have sleep apnea, you stop breathing as your pharyngeal muscles located in your throat relax to such an extent that they collapse and in so doing block your throat, preventing oxygen from entering the blood.

This lack of oxygen in your blood alerts your body to awaken and take a breath, but not to wake fully. You then return to a deeper sleep but soon after again have to take another breath as the process repeats itself. This occurs at high frequency for many individuals and many people do not notice they suffer from the disorder or that they are waking many times per night. As the disorder is often related to loud snoring, it’s usually the bed partners of sleep apnea sufferers who have the first inkling that their partners suffer from disturbed sleep patterns, especially if this is coupled with daytime fatigue.

The lack of restful sleep you experience impacts your life as you always feel sleepy and exhausted, even after a ‘full’ night’s rest. Some people may fall asleep while driving or while at work due to this lack of rest.

Medical professionals agree that sleep apnoea can aid in worsening many conditions their patients suffer from, such as obesity, depression, anxiety and other stress-related issues as the body never gets to fully rest and recover.  A person who suffers from sleep apnoea may have poor concentration, and also never feel as sharp, productive or on point as they used to before the disorder entered their lives.

Early detection of sleep apnea can lessen the impact the disorder has on an individual’s life which can have emotional effects (such as irritability and moodiness) and physical health consequences such as heart disease, liver issues and even diabetes.

The great news is that sleep apnea is treatable in South Africa and the wider world, and there are ways to get a restful nights’ sleep again.

If you believe you may have sleep apnea, make an appointment with your doctor ASAP to get treatment and ease your symptoms to avoid further complications.

The Three Types of Sleep Apnea

The most well-known type of sleep apnea, Obstructive Sleep Apnea (OSA)  is related to the collapse of the soft tissue pharyngeal muscles which blocks the airways as they relax, resulting in blocked breathing and loud snoring. The muscles that relax support the uvula, a triangular piece of tissue, the soft palate, the sidewalls of the throat and tongue as well as the tonsils. As the muscles relax the airway narrows or close resulting in the gasp for air a few moments later. The pattern can repeat itself 10 times every 20 minutes which explains why sufferers never can get restful sleep.

This type of sleep apnea relates to a condition where the central nervous system or brain nerves doesn’t signal to the muscles that control breathing to engage and is a much less common form of sleep apnea. This usually is a result of respiratory control centre instability. With Central Sleep Apnea sufferers often do not snore.

As there are three types of Sleep Apnea, some of the symptoms and signs of the sleep disorder may overlap.

You might have sleep apnea if the following symptoms are present:

How normal is it to stop breathing like this when I sleep?

70% of obese people suffer from sleep apnea, about 6% of the general population and many do not know they have the disorder, which affects mostly men from 30 onwards. As many people wake and fall asleep during the night, a sleep disorder is only diagnosed after a sleep study which will show if these recurring moments of wakefulness are happening at a high frequency, as to be deemed serious.

Who usually gets sleep apnoea?

Mostly men over 30 who are obese, or people over 50 although it can occur in all age groups(even babies). It is more common in men than in women and there are a variety of causes for it.

Depending on your diagnoses, different sleep apnea treatments are advised, and at Fountain Circle Medical Suppliers we urge you to make an appointment with your doctor to get a formal diagnosis if you believe you may have sleep apnea.

In South Africa, a sleep study (an overnight stay at a sleep centre) is usually carried out to determine a diagnosis of sleep apnea, and things have certainly come a long way, with treatments and devices being much more human-friendly these days, allowing ease of sleep.

CPAP Machines or Sleep apnea machines have come a long way in recent years with minimalist nasal masks that allow a user much more freedom of movement in their sleep. A CPAP machine provides positive air pressure to a wearer during the night keeping your breathing passages open, and allowing restful sleep. CPAP machine pillows and other accessories make sure that patients can stick to their treatment to reap the benefits of recovery.  Patients report an immediate boost in energy levels and mood once they start using CPAP machines to treat their sleep apnea.

Yes, it’s something like an athletic mouth guard and is a popular choice for those sleep apnea sufferers for which it will work. Two common versions are a tongue retaining device and a mandibular advancement device.  These devices have an effect on either the tongue or jaw and aid in creating a position that lessens the probability of your throat being obstructed.

As with anything, the variety of devices available will mean that experimenting until you get the right fit is advised.

As a last resort and after exhausting other sleep apnea treatment options, surgery is also something your doctor might advise. Excess tissue will be removed during this surgery, usually tissue located inside the nose or at the back of the throat. Obvious tissue such as tonsils and adenoids will be the first to go. There is also jaw reconstruction to create a larger upper airway. As with any surgery, there are risks involved and in rare instances, symptoms did not improve after surgery.

As with a pacemaker for heart patients, this newest development in sleep apnea treatments involves the insertion of a system that keeps the muscles that help your airway to remain open, firing on all cylinders, which helps you breathe easily at night.

Apart from CPAP devices, EPAP and BPAP devices also exist to help treat your sleep apnea. EPAP or ‘Expiratory positive airway pressure’ are perfect for people with milder obstructive sleep apnea(OSA) symptoms whereas BPAP or BiPap(Bilevel positive airway pressure) are a good fit for someone who doesn’t adjust to CPAP treatment or someone with CSA, who may be suffering from weakened breathing. This device automatically adjusts the pressure of air blown into the air passage.

Then there are ASV(Adaptive servo-ventilation) which be used to treat both OSA and CSA which uses an algorithm to store data about your breathing patterns and then anticipates when next you will need another breath.

Weight loss and regular exercise can help reduce the severity of some sleep apnea disorders(or eliminate it), as well as avoiding alcohol and smoking.

One of the most common sleeping disorders plaguing the modern person is known as sleep apnea. Sleep apnea (pronounced AP-ne-ah) is a disorder that affects breathing during sleep, which means breathing can be too shallow or there might be periods when breathing stops for a few seconds. Usually those who suffer from sleep apnea are completely unaware of their condition, although they suffer during waking hours. The disruptions in your breathing can happen as many as 30 times in an hour and can move you out of your deep sleep.

Luckily there are many ways that you can treat sleep apnea.

Sleep apnea is a chronic health condition that needs to be treated as soon as you realize that you are suffering from it. In fact, this sleeping condition is one of the biggest causes for sleepiness during the day. As mentioned before, sleep apnea is a largely undiagnosed illness and it cannot be picked up in a blood test, but once the diagnosis has been made, it is treatable.

Usually a sleeping partner, or family member, will uncover the illness. Loud snoring, and pauses in breathing are very noticeable to those around you, so chances are, if you have sleep apnea you will be altered to the sleeping condition.

A brief overview of sleep apnea

Collapsed breathing passages or blocked breathing passages are the primary cause of this sleeping condition. This type of condition is known as obstructive sleep apnea and shallow breathing is the result. Not enough oxygen going to the brain can cause headaches and of course there is the issue with tiredness during the day. This condition is also going to cause the sleeper to move abruptly from deep sleep back into shallow sleep.

The other type of sleep apnea is known as central sleep apnea and it is far more uncommon. This kind of condition is more common among those who have existing medical conditions or who are using certain kinds of medication.

Should you be suffering from sleep apnea, the chances are you have already realized how this condition can affect your life. So while it is a condition that is very difficult to diagnose, there are a few symptoms that you should be aware of.

The symptoms of sleep apnea

Should you have one or more of these symptoms you might want to consider visiting a doctor, who may ask that you have a sleep apnea test. This can be done in a sleep disorder clinic or it can be done at home.

This sleep test is also called a sleep study, and can consist of multiple-component test that transmits the data from your sleep such as your physical activities, including breathing. This equipment is portable, depending on who is doing the testing, and will go a long way towards helping to identify the condition.

Electrodes are placed onto the face and scalp and they send data back to the measuring equipment. The data is generated by brain and muscle activities, and along with belts around the waist measuring breathing, the doctor will be able to get a full idea about your sleeping patterns. The amount of oxygen in your blood will also be measured.

Now that the tests have uncovered that you suffer from sleep apnea, you will need to know what treatments you can consider using. The treatments for sleep apnea range from changing parts of your lifestyle to losing weight. Depending on what the cause of your condition is, there are a number of things that you can do. Sometimes the condition is worsened by drinking alcohol or taking sleeping tablets, or even smoking.

If lifestyle changes are not helping, the next thing that you will need to do is looking at specific machinery that will help with your breathing. Sleeping with a sleep apnea machine, known as a CPAP (Continuous positive airway pressure) will provide a continuous flow of air into the nose/mouth ensuring that you will be provided with air throughout the night. This is possibly the most common treatment currently available.

In more extreme cases, surgery might be the only option available, however there is no need to worry. Your doctor will evaluate the reasons for your sleep apnea and then decide if such a drastic measure will be necessary. Surgery can be used in cases where the jaw is too small, if the patient has a deviated septum or if the patient has large tonsils.